Showing posts from March, 2007
Show all

From the Just Cross Stitch Ornament Issue 2004, Christmas Ornament 2004 by Periwinkle Promises. Its done on 24ct sparkle white linen with cranberry Gloriana, a fiber which I am now giving serious thought to throwing away so I don't have a brain lapse and use it again. I love stitching with silk but this fiber was a test. It knotted, snagged and the ends on the back where the tails are were fuzzy and frayed looking. Not exactly what I would expect from a silk fiber, I think perhaps its just not spun well enough so in the future I will stick with Water lilies or Silk N Colors if I want an overdyed silk. I've also made a few changes in the actual design. The diamonds were actually supposed to be queen stitches, another favorite of mine (ha ha) I wasn't paying the closest attention to the directions and got started doing the diamonds before I realized it and I liked the look of it so I continued with the diamond pattern instead of queen stitches. I still need to pick up
4 comments
Read more

Never did quite under stand that saying but it seems I've been doing the happy dance a lot lately :) Here is my completed Jim Wurth dodecagon, #5 Hearts and Flowers. Despite the unseasonably warm weather I was found watching movies and stitching much of the day today and managed to get this one finished up, Yay!! I also did work on an ornament for the Christmas Ornament Stitch along but I haven't quite finished that one up. I may yet do that tonight if I still feel like stitching. Hope you all had a great weekend! :)
12 comments
Read more

Finished the last few beads this morning and what a chore THAT was. There are 5 beads seated in the center of each Jessica stitch in the center square which is normally pretty easy, in Mojave that also used this technique I must have stitched the Jessica stitches a bit more loose because it seemed to take FOREVER to get the stupid beads to seat evenly and not look like a jumbled up mess. They're all in place now and look pretty good although I keep contemplating putting a small dab of glue in the middle of each of them to help keep them where they are. I'm concerned once its finished its going to get knocked and the beads will all over the place and then I'm screwed to try to fix it unless I tear it all apart... that would not be so fun. We'll see though, I'm taking it to Sit and Stitch tonight so we'll see how it survives the journey, if it can take that it might be ok. Pay no attention to any oddities you might see happening. I've finally messed with
7 comments
Read more 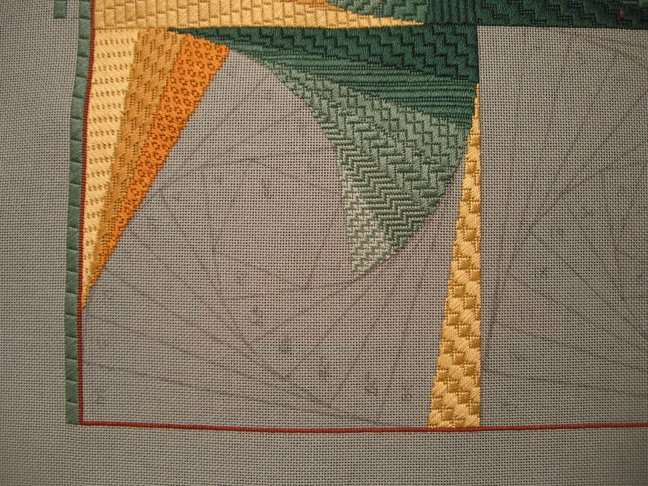 Twister is back out now that Baroque is completed and it is again reminding me why stitching it is so discouraging. I started working again on the yellow/gold colorway and in 6 hours of work I managed to get the dark gold(orange) border in on the bottom and that one yellow "wedge" on the right side of the square. 6 hours for that little bit is just so slow going. Every stitch on this piece needs to be laid with a laying tool, I have a trolley needle, the very one that's acting as a apostrophe in my banner, so what could be a quick stitch takes twice as long to ensure that all the threads lay neatly. I've actually tried doing one section without the laying tool and I hated the results, the stitches looked messy and there were gaps where the congress cloth showed because the thread kept twisting so I'm going to have to keep plugging away at this one with the laying tool just to ensure I'm happy with the finished result of all the labor in this piece. On t
8 comments
Read more
More posts