More stash and a new addition

- February 09, 2018
More stash, did I really need MORE stash? Nope, not at all. I have more than I will likely finish right now and they keep coming out with new things that I love. Turns out all the stuff from my mom's house that I assumed had been donated, is actually in my brother's barn patiently waiting for me.  It started with Thanksgiving, we were visiting and filled our half-empty suitcase with whatever I could grab and set a few things aside. It was to be shipped, eventually, but I didn't really think much more about it.

Then December arrived. My uncle was in a bad car accident and as a result, my late mother's dog was now in residence at my brother's house.  She's mostly blind, deaf, and his big dogs were not a good mix so I offered to take her, that's where the stash battle goes off the rails. 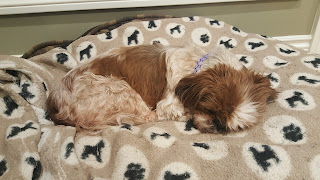 Missy is a Shih Tzu and an old one so I flew to pick her up since they don't allow them to ride in Cargo on a plane and its several days of a drive. I was planning to grab some stuff while I was there, I took the largest suitcase we owned and only filled it halfway and figured a cheap suitcase could be had if I didn't find one in mom's stuff since my ticket allowed 2 bags. I returned with a stuffed carry on, 3 large suitcases and a very confused dog. 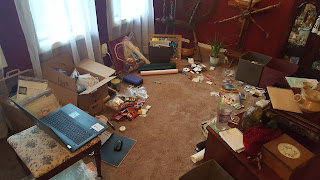 Round one.  This is some of what was crammed into the suitcases but for a batch of framed pieces and the thread pile is lurking just out of the photo. The cost of new glass was less than packing and shipping so I found a hard sided case and won at roulette with the airline, it all made it in one piece. 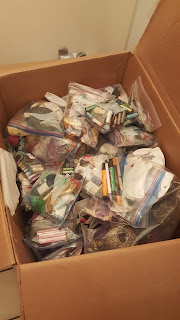 Round two arrived last night, thread, yarn and a few more pieces of her finished work. Sadly one frame didn't arrive in the best of shape but that shouldn't be bad to fix, another piece had a crack in the glass but its small so another easy thing since I admittedly did not do the best job at packing. 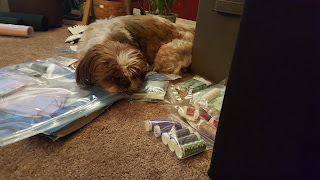 At least Missy is enjoying the mess. It all smells like my mom so it's probably as comforting to her as it is grinding to me to have thread and canvas everywhere.  I have joked that my mom could have opened her own store, after looking at all this I know she really could have. I have entire lines of thread, most of it never used that will eventually get listed on Etsy or Facebook so someone can put it to use instead of it collecting dust here.
Dogs Stash traveling 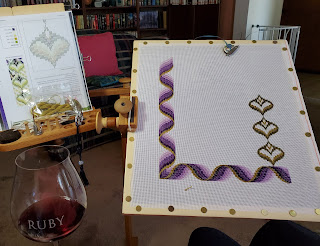 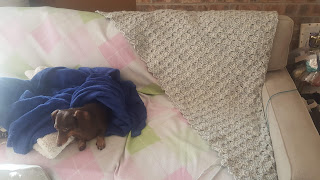