- February 25, 2019
Only a day late and that is because I was fussing with yardage for starting another afghan yesterday and booing at the weather forecast that kept promising a lot of snow which I know will never materialize. If it snows, it really needs to be enough that I get a snow day or at least a work from home day.


Much of my time has been taken up with working on my afghan.  I might have possibly started this last January and put it down when it was warm over the summer, then forgot to dig it back out. I ended up sick for a few days this month, I was able to relax in a relatively dim room and still get quite a few rows in and being a smaller throw it's easy enough to haul around to work on.  I'm going to check it for size after I finish the current cake to see if I need to do another. I hope this will be enough as I really want to get on to the next hook project but I'm seldom that lucky. 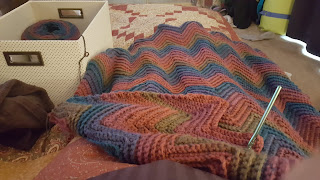 I've also gotten a number of stitches in on this needlepoint piece.  This is all done in basketweave, nothing super exciting but when done it will be the cover for a stool I have from my mom.  It currently has a very country style fabric which really isn't my thing, this will be a big improvement and bonus it was one of mom's favorite flowers. I've been jumping around, following one color at a time for the best effect instead of working by flower as I did with the purple and white one.  I did not choose the fibers for this one, it was sold kitted by my local EGA chapter from a stash that was donated by the family of someone no longer able to stitch so they're not all my preference but I have enough colors that I should be able to make it work. 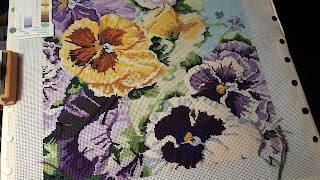 The WIPocalypse topic this month is 'What do you listen to while stitching?'

Usually, something I'm ignoring on TV, occasionally an audiobook but I get through so many of those on my daily drive it's not always practical. This weekend, for example, my husband was playing a video game and the dogs and I were curled up on the couch.  I do still watch some of what is on, but I've never been one who watches the weekly tv shows but for a few so I'll watch reruns in the on-demand menus or something on Netflix
Crochet Needlepoint SAL

Got Coronation finshed yesterday when I got home from work. I'm extremely happy with the finished piece, as I've said before the photo just didn't do it justice. I hope I've done a bit better with my shot here, I zoomed it in more than usual so you can see some of the detail in the stitching. I am taking it Monday to show everyone as they were talking about ordering these but no one else got around to it. After that its off to the finisher. I don't mind finishing ornaments myself but I don't like working with canvas. The finisher my mom uses is pretty reasonable so off it will go.
Read more