- April 24, 2017
I wouldn't be me if I didn't have more projects started than I could reasonably work on at once so why not start a few more.  I had a plan when I started this, and I did get 2 near finishes out of it. After completing the Isotta pieces, I figured it was worth a try to dig out a few more, smaller projects to do the same and thin the stash pile.

First was Flight of fancy Myrtlewood Pincushion.  Looked like a quick stitch, then I got started and realized it's all over 1, so I need good light and possibly magnification to see what I'm doing.  Not exactly something to keep in my purse to stitch in the car or if I'm out and have some downtime waiting for an appointment. 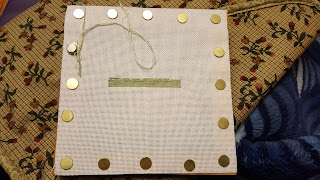 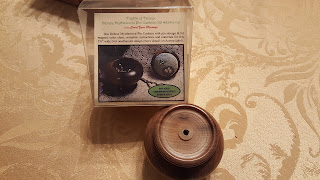 And not having learned my lesson with projects that are 1 over 1 I started the Bird of Happiness Pin Cube. I chose both initially to get these containers out of my stash drawers, they're big and waste space, but I guess I should have checked the instructions.  This one is at least mostly done, there are only 2 sides to stitch in, and the rest is filled with pins once it's sewn together. 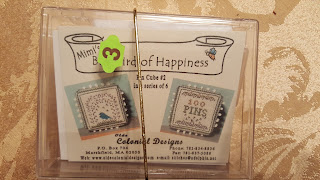 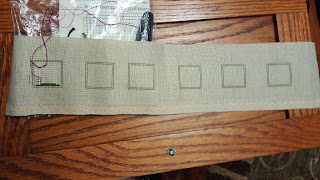 No to be discouraged by 2 starts, now we have This too shall pass scissors case & fob.  This was designed as a fundraiser for breast cancer research after the designer made it through her own battle with cancer.  It was in the stash pile from my mom, so I thought it more fitting the monogram reflected her and my aunt for their battles with cancer that ultimately took them too young.  The G was the first initial they shared, 2009 the year I lost my mom and 2014 my aunt. 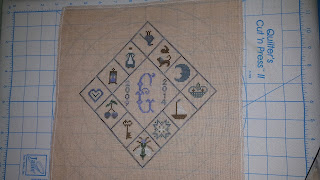 This one is on the pressing table for finishing, but when I went over the instructions I realized the back stitch was missed around the edge that is used for assembly, so I'll have to get that stitched in and press it again to hopefully finish next weekend into the scissors case.

I'm trying to plan nothing this weekend, so I can sit at my sewing table and get a some of the finishing sewing done.  I went through the finishing pile and found 4 ornaments, 2 work boxes by Mary Cox that are half assembled (one was mom's), the scissors case if I get the back stitch in, a needlepoint snowman cube, and Strawberries so Faire Sewing roll from With My Needle. On second thought, perhaps I need to take a week off to try to get half that done.  I can sew, but quickly is not a word I would use to describe my talents with assembly of the finished pieces.