And then there were 2 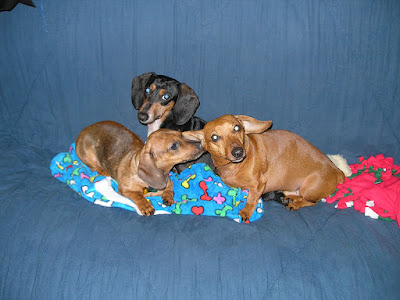 For years we've had 3 miniature dachshunds in our home, 2 older dogs and one we got as a puppy to help the older dogs understand how to be dogs.  Lizzie, the black and tan came from a puppy mill and was terrified of us, and just about everything around here.  She'd get upset and chew through the leg of a coffee table in a few minutes out of sheer terror over simple things like the door bell or a new sound on TV.  Together the three of them were like watching a pack of velociraptors as they're described in Jurassic park, they moved around the house as a pack seeking snacks and world domination.  I would be in the kitchen and one would be in front of me trying to push me to step back and the other 2 would be behind me to trip me so I'd drop whatever food I had. 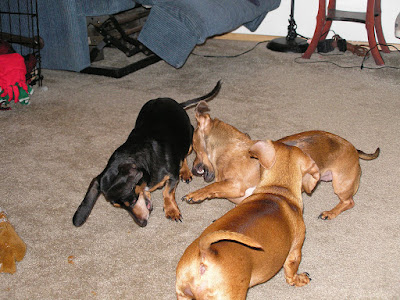 We lost Lizzie in June, and Indiana who had been in a cart due to loss of movement in his back legs from an old injury followed soon after in October leaving Maggie the only pup which she was not enjoying.  I was home over the holidays which made it easier for her, not being left home all day but it didn't last once I went back to work.  We'd come home to a very stressed dog shrieking and upset.  I'd been looking for a dog for a few months, we really wanted another dachshund but wanted one Maggie's age and every one I found either was not in the age range I was hoping for or the pup was snapped up by another adopter faster than I could respond.  Finally the week I started back to work I had success and we brought home Riley last Saturday, a Chocolate and red boy who has so many quirks of both Lizzie and Indiana in one dog I couldn't have done better with a new dog.  He walks like Lizzie, more of a glide along the floor which always gave the impression she was trying to sneak around, he loves to snuggle up with you while you're watching TV, and in a really throw back to Indiana being here there is toy carnage everywhere in the family room. While Maggie is resenting having to share her toys and her snacks there is a calm in the house that there hasn't been in many months as they have their morning nap curled up together in a chair. If you could ask her thoughts she'd likely say 'Ieeww boys' but she is happily curled up with him and they take turns chasing each other around the house. 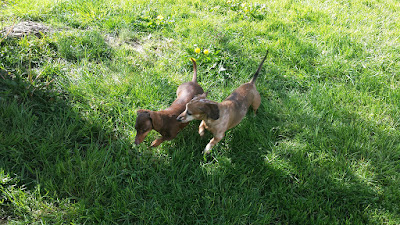