- March 12, 2015
We seem to be jinxed when plans are made to go hiking somewhere new, especially when its an area we've been wanting to see for a while and the past weekend was no exception. We had a trail picked out that was an hour and a half drive just to get to the trail head but the hike was only around 2 miles so we found another trail nearby that was just over 2 miles, the idea of hiking less time than we were driving just wasn't ideal so a split hike it was.

We packed the gear the night before and had everything in the car but a few last minute things, it threw my whole thought process off for packing that I forgot something. Well, turns out 'something' was the leash for Maggie so she could hike with us, oops.  She's good about following on hikes but some of the trails are narrow and she's demonstrated a preference for walking on the edge of the trail where she could easily slip.  Because its us, we realized it was the leash about 10 minutes from the first trail, that was pretty special.  We passed having nothing to improvise with and headed to the next trail head, there was a store along the way to pick up a leash and we could come back to this trail later. We ended up going to neither trail we'd planned and instead stopped at a random destination on the road up the coast for more of a walk but it was amazing. 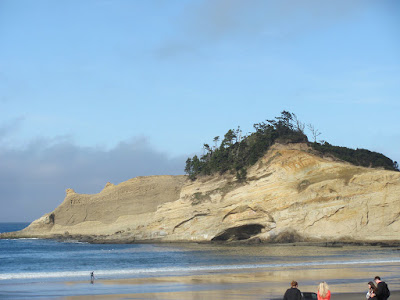 This was the rock formation we were greeted with when we parked, no rails or signs up there so it didn't look like anything but there was a beautiful beach, a haystack rock and a huge sand dune that people were body surfing.  We approached the rocks to find a sign "Danger - Proceed at your own Risk"   There were no barriers, we were able to walk all the way out to the furthest formation. 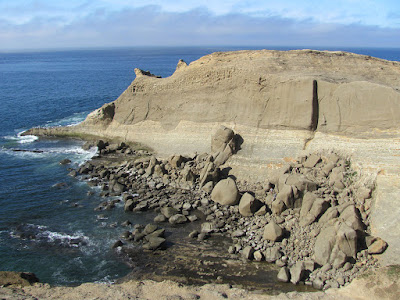 Maggie even approved of the hike. Often she was the one to follow as she found easier ways to get down the steeper areas of the trail out of need with the limited reach of her legs. 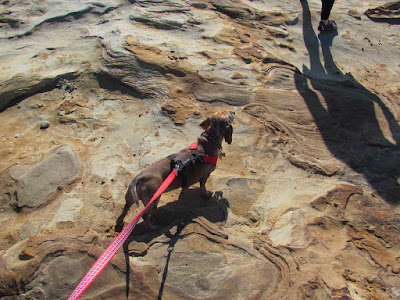 From here we headed north along the coastline, there were some beautiful rock formations and what looked to be some caves at the water line we wanted a better look at.  Sadly no way to get down and look without a water craft of some variety but it was worth it for the views we did see.  There were signs everywhere "danger, do not go beyond this point" but when the fence is only 2 ft tall from the dunes changing, this did little to deter anyone.  We got to the end of the fence and there was another 'danger proceed at your own risk' sign so we walked around to the area the last sign told us to avoid and got to see a nice set of waves crash below us. 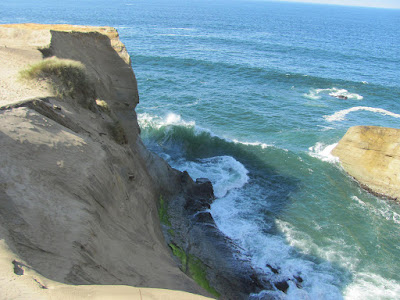 This was not taken with a zoom lens, I really was that close to the edge of the rocks.  You could see evidence of slides so I didn't go up to the edge but what you don't see in this photo were several people who scaled down the wall and appeared to be fishing in the cove that would have been on my right as I took the photo.  Defiantly a place we want to return to, possibly with a paddle board or a kayak to see what else we can see from the water and we'll see how Maggie does riding on a board in the water. Thanks for reading...
Hiking