- August 04, 2014
The weather was supposed to cool a bit this week so we made plans to head out on a hike.  I thought it would be nice to try something new so we picked the Lost Lake Butte trail on Mt Hood. It was quite the drive being on the opposite side of the mountain from the 2 state highways that go to the ski resorts but it when we arrived we were treated to a fantastic view of the mountain 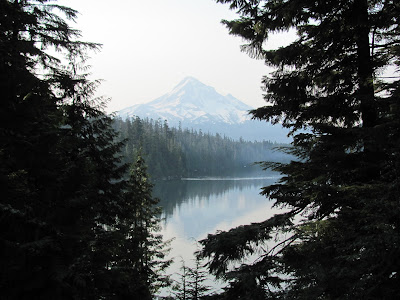 It was very hazy, I can only assume from the fires burning here in the state. The rest of it, well, was not nearly as picturesque and once we lost the small breeze the air was thick with humidity. 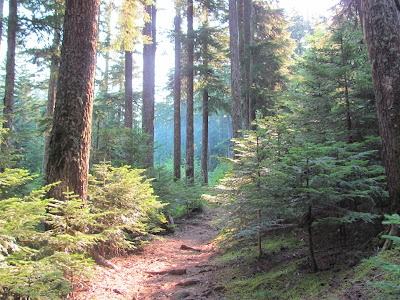 I'd love to share pictures from the top but we never made it.  We started out and the trail was very uneven, this photo was one of the smoothest sections.  Add to that the humidity was high and the altitude and breathing becomes a bit more difficult, then for good measure add in that I had the start of a summer cold and I was finding it a challenge to get a good breath  for as much of an altitude climb as this hike was.  When even Jay was breathing heavy, this was not a good idea for this day.  We'll likely give it another go in the fall when its cooler and less humid. 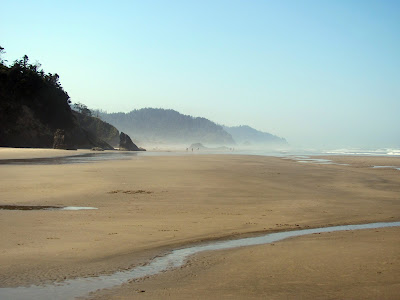 Since we didn't get the hike we intended on Saturday, we headed to the coast on Sunday and made it before the tide was in for a walk on the beach.  We stopped at a smaller, limited access beach and after a bit of a walk found a small waterfall coming down on to the beach.  There was a point of access to climb it, it a very small waterfall, and found this above the fall. 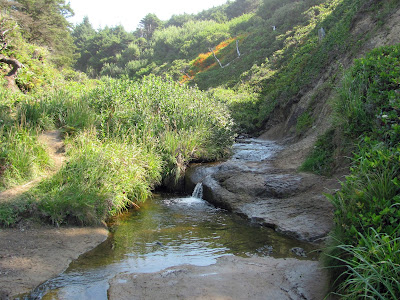 Were it not for the amount of foot traffic I could have stayed here for a while.  It was not unlike finding an oasis in the middle of the desert when you consider I was 10 steps from the sandy beach of the Pacific Ocean.  It just begs for you to sit, have a picnic or even a nap in the sun. Next week hiking is going to be dependent on my tomatoes.  They've started to turn red for harvest so I may have enough ready next week to keep me in the kitchen all day stewing and canning, will have to wait until later this week and see how the ripening progresses.
Hiking