First Stitching Finish of the Year

- June 02, 2014
I haven't been the best about my needlecrafts for a while.  When we started changes to our lifestyle it meant more time on my feet, exercising, hiking in addition to the usual stuff in keeping  a house and it got pushed to the sidelines.  I started 2013 with the best of intentions but between those changes, a trip for work, a pinched nerve and some issues with the dog I left a lot to be desired on the follow through.

With that in mind I was pleased to have the first finished project for 2014.  This was a project started by my mom and I found incomplete in her things after she passed so I brought it home to complete it. It wasn't something I would have picked out but I wanted her last projects to see completion. 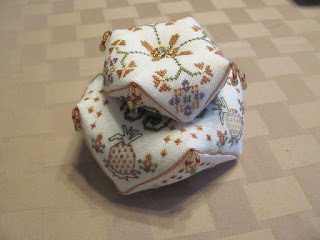 This is Pineapple Biscornu by Jeanette Douglas.  There should be a scissor fob as well but as I gathered all the scissors this week and found out that I have in the neighborhood of 70 pairs, all with beaded tails, I decided i would forgo the scissors. 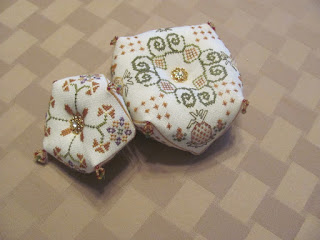 Aren't they adorable even without the scissors? Of course, now I'm second guessing the button choices. The buttons on top were shank buttons which are not the easiest to work with but the bling was fun. Speaking of my excessive scissors, and stash, and more stash that might be coming my way I'm putting those things I am willing to part with on Etsy.  Right now we have some stash but I now have so much that more is sure to come including some of those scissors.
Crafts Cross stitch finishes