- March 02, 2013
This was probably the most difficult hike we've done to date, partly due to Jay being sick and I might have had one too many margaritas last night at dinner. I'm an amazingly cheap drunk so I normally have one drink when we're out, this was a particularly painful week at work so I decided a second drink was necessary.  Jay is now under orders to discourage this in the future at all costs, ugh. So after taking something for the headache around 4 am and finally dragging my rear out of bed around 730, by 8 I was feeling better and we decided to pack up and head out.  We got to Multnomah around 10:30 so it was still early to avoid the masses that gather here during the day.  All the families and kids are there to see the falls and could care less about any sort of trail etiquette because they're there to look and wander some of the paved trails not to take a hike, when we headed down there were many strollers to dodge along with people walking with while looking through their cameras.

The view from the parking lot, elevation around 40 ft above sea level, we'll be heading to the top of the waterfall and back up the mountain. On the way up you traverse many, many switchbacks to climb the elevation.  The first half hour was just climbing to the top.

As I said, many switchbacks.  With there being so many people there for a casual visit I suppose this gives them a better perspective on what they're getting into, I called them rude names all the way up. As it turned out, switchback 9 was the crest of the climb with 10 and 11 going down on the other side to get to the viewpoint.

Approaching the viewpoint, there is a platform hiding in the distance. In the event I had a death wish I could wade out into the current at any point.  I, being the grown up that I am decided to climb a rock to get a better angle for this shot and while goofing around Jay took a pic of me waving my arms like a fool 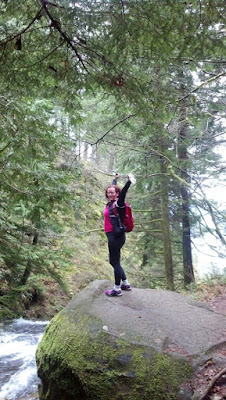 Very sexy, my face is red from the climb, my socks are all messed up and by the way that backpack? Its nearly empty. heh heh  Jay has the water, first aid type stuff and snacks for himself.  I have a few snacks and a lot of air in mine.  I think the water bottle and camera in my hand goes well with the state of my hair from the water vapor in the air.

Yep, its a long way down.  You can see the first bridge spanning the water and the lodge, sadly the platform didn't extend over to get a good top view of the water crashing down.

View looking out, the freeway and the Columbia river.  A lot of the morning fog is still hanging around below, pretty sure I can see Jay's car parked down there in the lot.

And the river above the falls, loved in here.  This is the point the paved trail ends but it allows all the families pushing their strollers to reach the top of the falls if they can take the hike while pushing the stroller or carrying kids.  There is a clearing across the bridge to sit on the rocks and have lunch or just watch the water

The Dutchman tunnel which was not really a tunnel, the rock was worn back near the bottom where the trail is and curls over our heads as we passed this stretch.  A bit disappointed the side washed out but Jay is looking very impressed with a look that asks why I'm stopping yet again.  Note the fabulous trail conditions up here, mud with a side of water and rock.

We saw 3 falls along the trail, this was the one with the best viewpoint for pictures. Weisendanger Falls which was the third along the trail, much like Multnomah being a straight drop but obviously not quite as high. 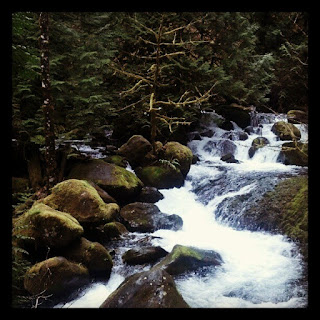 This was my favorite spot of the hike, somehow I was too busy looking that I didn't take a proper picture with my camera but I do have the nice camera phone shot a la instagram.  Hello, park ranger? I would like to camp on the small island in the middle. That would be ok right?
Hiking