Baroque Progress and November in Review

- December 04, 2006
Have you ever had one of those projects where you stitch and stitch and stitch and never get anywhere? I'm begining to feel that way about Baroque. I still love the project but I put a lot of hours into this piece this weekend and didn't get nearly as far as I felt I should have 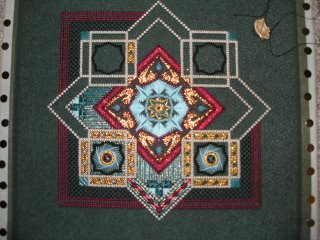 Its coming along but not nearly as I thought it would. I had this on my list of things to finish for November but after spending half of Saturday and a good portion of Sunday working on it I know that even without the interruption of my Mom's birthday present that wouldn't have happened. For example the diamond that comes to a point at the bottom center. That last band in teal and red took hours! There are 6 different threads in that little space for 13 journeys end to end plus the Jessica stitches, ACK! As it stands now that bottom center part is complete as is the lower left square, I still have a bit to go on the outer border which hopefully won't take quite as long.

And now for the review of my November goals, tell me again why I do this LOL! I set them and I always seem to over shoot reality or get sidetracked with some other project.

November Goals
1. Finish Baroque - See above :)
2. Complete finishing on Shaker Boxes What shaker boxes.. oh yeah those. Nope *blush*
3. Stitch ornaments for christmas exchanges This I'm working on. I've decided to bead and I had to get to the bead store to get more seed beads
4. Sew Project Roll - Yes! It turned out rather well considering it was a cross between the pattern I had and the photo I had seen on Jo's blog! What I should do it actually get the finished projects finished LOL

And now lets try this again and be a bit more realistic considering the holiday :)

December Goals
1. Finish ornaments for exchanges. These have a deadline, I can't not make them LOL
2. Work on Shaker boxes. I really NEED to do this. There really isn't a whole lot to go as I'm on the lids its just time consuming because of the small size
3. Finish Jim Wurth's Poirot. When have I failed to finish one of these? LOL
4. Finish Baroque. I'm still going to put this one up. I really would love to see this one done, of course then I have Mystique and Rococco to go with it that I'll have to stitch ;)

Speaking of Poirot does this word strike a chord with anyone's memory? I must admit when I opened my package and read the cover I thought it was a typo. Poirot? What the heck is that? Then I took it to stitching and a few of the ladies thought they knew it. Hercules Poirot which apparently (I've really never heard of him) is an Agatha Christie character, He has a handle bar mustache which they thought that's what the 2 crescent stitches looked a bit like his mustache. Then the wavy verticle stitches some thought were cigar smoke, someone else remembered he suffered from sea sickness so they were waves. Not sure how accurate an assement that it but it was interesting none the less so I thought I would share.
Happy Stitching :)
Crafts Needlepoint