- November 14, 2006
It arrived yesterday after being on backorder, knew this though so I've had all the stuff ready to go to get it stitched since I only have a little over a week to get this done. Thankfully there really isn't a lot of stitching to do on it, mostly finishing which doesn't seem too difficult. 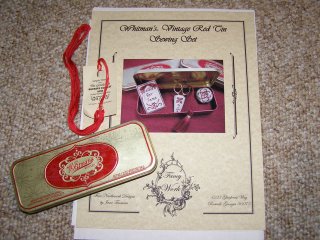 The pattern calls for a different shade of red but after seeing it in the LNS this weekend I wasn't so excited about it. I mentioned it to mom (who this is for, she thinks its still on backorder) and she agreed the color was not right to go with the tin so I'm using Buckeye Scarlet instead. I have it all packed and ready to come to work with me today, I'm hoping to have the stitching done this week so I can do the assembly over the weekend and have it done without waiting for the last minute. That will depend entirely on how well the over one stitches and I get along on the letters.

Thanks to everyone for coming by as always. I have been quite obsessed with Flight of a Butterfly since I first seen it. I've only hinted to "Santa" at least a half dozen times last night that I sooo need that for Christmas  Since I know that "Santa" will read this at some point consider this hint #7 LOL
Crafts Cross stitch Stash