- November 20, 2006
I spent a good part of Sunday at my sewing table trying to get this set finished for my Mom's birthday this week. I did manage 2 out of the 3 so I guess that's not bad. 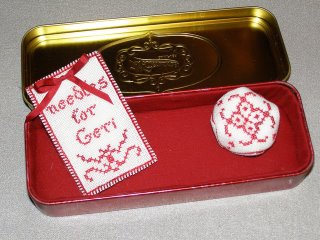 After all was done stitching wise I cut them apart to begin the assembly. The biscornu was easy enough, same with the needle book. The scissor sheath however, I believe I invented new ways to express my displeasure with things with the scissor sheath. I cut the lining according to the pattern provided and when I matched it to the stitch, surprise it didn't fit right. I go back and check the specifics on the design only to find out that it is supposed to be on 32ct linen not the 28 I've used *sigh* I should have known better, I checked a few stores online to see if one would tell me what fabric was needed so I could have it and have it ready when the chart arrived and the one I found stated 28ct.

Oh well, and that has nothing specific to do with my frustration with the scissor sheath actually. Both sides are linen, I have tried and cannot get 2 pieces to MATCH! Sewing is not my specialty, never has been but this is beyond frustrating. I'm considering stitching a new one and finishing it some other way but I haven't the first clue how. If anyone has any suggestions I'd love to hear them. 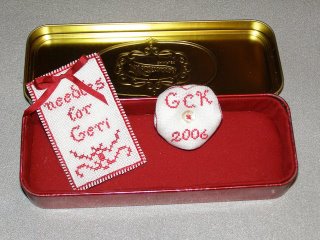 On a more fun note this arrived on Friday! I was hoping I'd see this one sooner rather than later, this was one of the ornaments pictured in the ad that was in Needlepointers and I think the blues are fabulous. Ok, except for that Marlitt, I've never chosen to stitch with that before because its such a slippery thread and that just never struck me as any fun, but as I sat laying the threads out for the photo it was actually snagging on the canvas so I hope it doesn't cause too much problem when stitching with it. 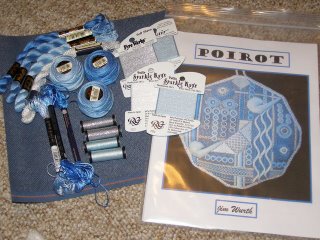 I probably will not be starting this one right away, I need to finish mom's present and I have a few more things I really should get done that I should hold myself too before I start a new project, we'll see how that goes
Crafts Cross stitch Stash