- November 27, 2006
My new wheels :) My lease was about up on my old boring grey car so instead of buying that one it was decided to look for something new. Isn't it fun?!?! Vroooomm :) 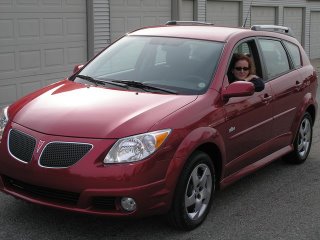 The red clashes a bit with my hair but oh well, perhaps it was time for a new hair color any way hee hee. Ahh who cares ;) Indy gave it 2 paws up because its easier for him to leave nose prints on the window and there's a lot more play area for him to get into trouble as I'm driving around. Jay has always liked these and was the one who first told me to check them out so I know I won't be hearing any complaints from him either. I have taken a bit of a down grade with the engine, the Taurus had a nice big gas guzzling engine but it also weighed as much as a small SUV so it needed it. This also has the added fun bonus that I can tell people I drive a Vibe-rator and see the confused looks on their faces LOL >:)
Life