- November 03, 2006
As I sit and look at it, it seems like there should be more there. After stitching the 2 Jim Wurth pieces the open areas on this Jean Hilton piece seem to jump out at me. I actually had to behave and not leave runners of thread around on the canvas to make sure they wouldn't show through when I was finished. 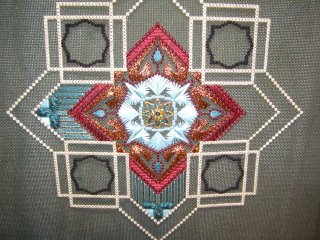 The beads and the Flair are in and the thinner red diamond is also complete. Next up is to complete those blue areas I have started and then I am dying to work on the medallions that are currently just black outlines within white rectangles. Those look like some extremely fun stitches to do but I've been putting them off so I wasn't working over already stitched areas and causing wear on the threads. I also noticed there was a bit more to go on this than I originally thought. I had forgotten about that very large border around the outside of the diamonds, oh well ;) After going through all the pages of the design it doesn't look very complicated so hopefully that will go fast and I can stick to my goal to have this completed this month.
Sorry if I caused anyone to go cross eyed reading my answer to this week's SBQ yesterday ;) That sadly is the abbreviated version of it as I can still tell you everything about the person who helped me come up with it including his screen name, where he lived and where he worked at the time, LOL I have a bit of a steal trap of a mind, my friends often have joked that I store so much information in there that I'm going to run out of room and forget my ABC's LOL Not likely but I am sickeningly good at recalling most anything I hear or read. Hope you all have a fabulous weekend!
Needlepoint