- November 02, 2006
I decided to keep going on the central portion of Baroque. This is my progress from last night, it could have been better but as there was nothing on TV I wanted to watch we put in Jaws which I haven't seen since I was very small so I kept getting distracted by the TV :) The tear drop shape the beads are making will next get filled in with Flair *cringe* If you've never worked with Flair its... interesting. Its tubular nylon so its rather like stitching with a strip of material from panty hose. It unravels, it snags, sounds lovely doesn't it? It, like many of the other threads I don't like so well, looks great on the finished piece so I deal with them. Here is a closer shot of the central area on the design. 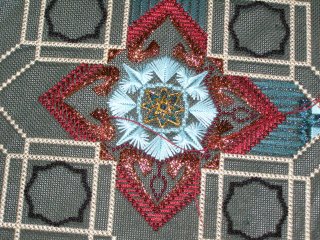 Thank you for the comments on The Garden Spot. It is an Indigo Rose design, originally it was a teaching piece but she released it for sale a few years back so I was told by the shop I found it in. The only bad thing about this pattern is one of the threads in it was discontinued so I had to look everywhere to find it. It turned out to be nothing more than a burgundy twisted thread which I'm sure I could have substituted but without the original color for reference I didn't know what to try. As for that yellow, well I've been looking at the original and its not nearly so bright. The pattern calls for silks as I recall and I followed the DMC list instead. Makes me wonder if that wasn't quite the right yellow to be using. We'll see when its done though, if it can be there without screaming at me from the completed piece its staying just because I think it is a fun yellow.
Needlepoint