- October 24, 2006
Tada! I did the finishing stitches on my lunch break yesterday. I LOVE the finished look on this one. I brought it to my Monday stitch group and everyone was drooling over the colors and stitches :) I had taken it in when it first arrived, as that's where I first heard about it. One of the ladies wanted all of us to order them and stitch them together but that fizzled. They all love the 2 I've done so far but its just not the "style" of a few of them I guess for lack of a better way to put it. One, for example, primarily does very whimsical designs which this certainly is not so I wouldn't expect her to want to stitch this one. Last night they were asking me what colors the next one would be, umm... heck if I know, I've only seen the 3 in the advertisement and that still doesn't tell me much other than the fact that I will see the other 2 designs at some point. ;) 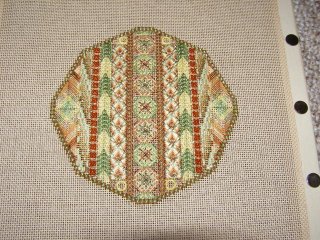 Guess I could have taken my photo in a "portrait" format so they'd line up nice next to each other, I may fix that later :) I do like the symmetry of the bands on mine, sorry Jim :) Now that I look at the contrast between the two (it didn't jump out at me immediately when I looked at the photo) I like my way better. Its still a beautiful design either way its done, I can't wait for the next one!
And in other news my scissors arrived from Jenna! They apparently arrived on Friday but I didn't actually find the package until I was going through the mail yesterday. *blush* Thank you Jenna I love them!! 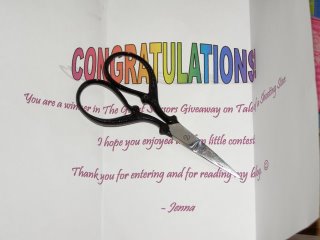