- October 27, 2006
And its about time, what a week it has been. Yesterday I headed home from work with just enough time to let Indy out and have some dinner before I had to be to the EGA meeting only to get here and not be able to get in! We had called about the security lock not working properly and they came out and changed it but the lock shop didn't key the lock correctly so we were stuck.  Thankfully someone finally came out to let us in.

Here is the progress from the evening on the Strawberry Reticule... 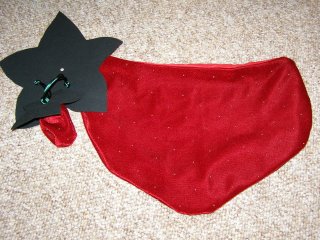 No, I must admit, I did not do the sewing you see here. A fellow member was showing us how to do the assembly and had her very nice... extremely expensive Viking sewing machine at the meeting. She has a business where she sews making drapery and other similar things.  I don't have the best relationship with my sewing machine I don't want to mess up anyone else's so I got her to run the seam for me so its correct and not a snagged mess. Anyway... Now the lining is in and turned, I have to sew up the opening in the lining I used to turn it out and then sew a seam to make a channel for the rat tail that is the drawstring. I have to run to Hobby Lobby this evening and get a hanger put on the back of a few pictures so I will hopefully pick the rat tail up and be able to finish this over the weekend. 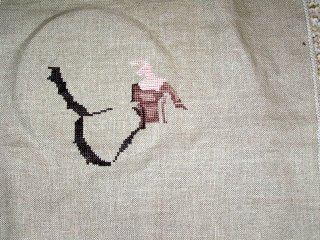 Here is my progress so far on Halloween Fairy. Its quite fun to stitch a Mirabilia and have it go so quickly. These limited editions are half the size of the average Mirabilia so she's moving along much more quickly than Winter Queen... I still want to stitch one over 1 on linen, I must be insane.  I was in a shop and saw it done over 1 on 40ct gauze and it the effect was FABULOUS! I think I may be able to manage over 1 on 28ct and not go completely insane in the process. We'll see though, I really have to finish a few of my large WIP's before I go starting anything else. Hope you all have a nice weekend!
Crafts Cross stitch Sewing