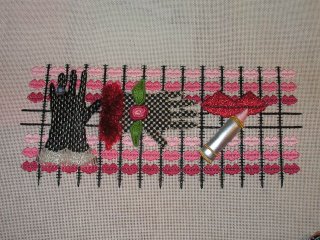 Put the finishing stitches on it last night while watching a movie. This one will now be going into my LNS for the "finishing" which means they will cut this to the proper size and mount it in the black Lee bag I purchased for it. 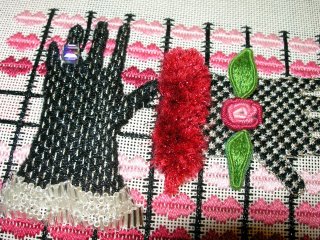 Here's a close up on a few of the raised elements on it. The ring, is a large square bead which I've had to resort to attaching with plastic coated wire. Mom put hers on with the thread as was called for, but the bead is apparently sharp and has cut right through the DMC so this was a better option. The cuff on that same glove is made of bugle beads that are all standing on end. On the right glove the furry cuff is turkey work with Kreinik. The Rose is, as I mentioned before, bullion knots. The leaves are done in the style of stumpwork. I say the style because as I read the directions and saw the supplies I wanted to scream in class. I was taught to do stumpwork by Jane Nicholas, an Australian teacher that knows the technique well and is very detail oriented in her work. This kit had wire twice the thickness I was expecting and the way she was teaching the rest to work it, ACK!!! Yes her method did work, but its rather like the difference between cross stitching with over dye and running a whole row vs. stitching each individual stitch. Yes doing a row at a time works and is faster, but the visual effect just isn't as nice than if you take your time and do it one at a time. I was good though, I kept my mouth shut until the person next to me asked how we (mom and I) did it. She'd seen our work and I think could probably tell by my face I didn't like what I was hearing.
Crafts finishes Needlepoint