- June 29, 2006
Ok... almost. I actually haven't picked up a golf club in *pausing to count on fingers* well its been about 4 years. At the time I managed to cause a disc in my lower spine to slip which pretty much put most fun activities on hold while I tried to let it heal. Eventually it did but for whatever reason I never went back out. This past weekend Jay was here and I had him bring his clubs along. We headed out to the driving range to see if I could still hit, it wasn't the best but I wasn't as bad as I had expected. Unfortunately for me, however my back is messed up AGAIN! Guess my swing isn't as good as I hoped it would be as I haven't been able to move right since. Ahh well, it was fun while it lasted. Once its feeling better perhaps I should see someone to find out what I'm doing wrong that I'm breaking my back trying to play a game, that just isn't right. 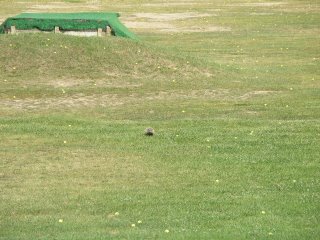 While we were there we saw these guys, its a bit distracting when you're trying to swing and there are 3 of them darting around in your line of sight, I think I hit one once, oops. He shouldn't have been there. Oddly enough I have one of these living near my backyard that Indiana seems to think he needs to rid me of, wouldn't he have had a field day if he was with us to chase these three down. LOL
I have a couple of pictures of Jay swinging which he saw and protested my posting them so I'll be nice and leave them on the hard drive. Maybe I should post that one of him eating cheetos in the truck when he was moving >:)
Life