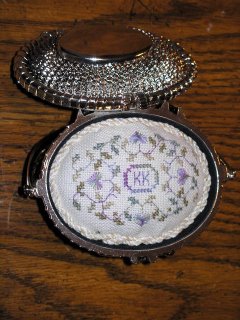 I think I've got this pin cushion about the best I'm going to get it. I may still mess with the stuffing a bit to try to fill out a couple of small spots but otherwise its done!  I changed the cording that was called for a bit because I didn't think it was enough the way the directions were calling for it to be done, I added a pearl braid into the twist. It doesn't show so much in the picture here but it does add just a bit of sparkle to the cord which goes nice with the small amount of blending filament that's in with the purple over-dye. 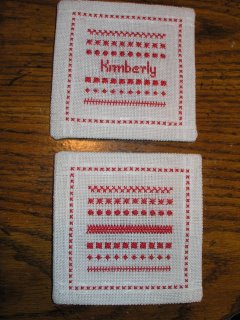 I went ahead and laced up my name tag last night as well. From here I attach some ultra suede to the back of each piece as well as a ribbon to hang it from and then use the back stitching around the edge to sew it together on 3 sides so I will have a pocket. I was a bit discouraged after trying to sew together my Still Stitching pocket and realizing the back stitch boarder on that was longer on one of the pieces than it was on the other so I'm going to have to do some work on before I get it complete but this one is going much better.