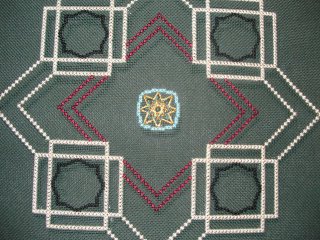 Am update on Baroque. Monday night I brought it along to sit and stitch and finished up the "anchor rows" so last night when I put it on the stand I was ready to begin some of the "fun" stitching. Alas, that was not to be. You can see the start in the center, the gold/teal star motif. Well, I had that in and done last night and got a start on the amadeus stitches that border the light blue circle, thats where the fun began. I got to the second Amadeus and things just weren't lining up as they were supposed to. I got out the master chart only to find that the light blue circle was stitched wrong, UGH! Each row of smyrna crosses are supposed to drop one thread not the two I had done so the whole thing was too big. Grudgingly I tore it all out and began restitching the light blue circle, I made it about half way around and checked, didn't line up... so again frog frog frogging I went twice! *sigh* It was getting late now and I was extremely unhappy so I gave up for the night figuring I would straighten it out this morning. Now I am sure its in correctly and the star is as it should be. Tonight is my EGA meeting and I doubt I will take this along, I have so many smaller projects that are easier to carry along, I will probably take Fine China as it is very close to being finished and I'd like to reduce my WIP list a bit. I have a few things I'd like to start, namely the Lee purse I got for Christmas but I promised myself I'd finish a few things before I started anything else new.
Needlepoint